I’ve got the lovely HK Carlton as a guest again. This time she’s here to tell us a bit about her newest release, If You Can’t Stand The Heat. Feel free to leave a comment or two. 🙂

Take it away, HK!

What inspired you to write If You Can’t Stand The Heat?

Several extremely arrogant men inspired this book. A real combination of a couple of haughty television chefs—I’m sure you can imagine which ones; a certain tight t-shirt-wearing British Idol, J and a few men that I’ve had the fortune and or misfortune to meet in real life, depending on how you want to look at it. Sesto Théodore is your typical ego with feet. Handsome, confident, at the top of his field, a respected chef, restaurateur and all-out legend in his own mind. But I wanted him to meet someone who could stand toe to toe and barb for barb with him and not wilt under the pressure. I wanted her to be tough, successful in her own right, maybe a little cynical. I didn’t want him to have an easy time of it.

Was there anything you found particularly challenging when writing If You Can’t Stand The Heat?

I also had to do a little culinary research to complete the cooking scenes. Although I do cook, I do so for a busy family and full course meals are not on the menu here at Chez Carlton. You want ketchup with that?

How did you come up with the title If You Can’t Stand The Heat?

Well, since IYCSTH is written around a cooking competition, a little play on the old adage If you can’t stand the heat get out of the kitchen fit perfectly. And Sesto and Syn throw off enough heat of their own that it suited their combustible attraction and relationship.

I think Sesto and Syn are a 3 —on fire; just as the amazing cover suggests.

Is there anything else you want to include?

More recently I signed a contract with eXtasy Books for a family saga series. This manuscript has been with  me, in one incarnation or another, almost as long as my first book You Found Me. Coming soon Always Cambridge. It’s a violent, tumultuous, heart wrenching series filled with hard choices, self-sacrifice, loss and love.

Thank you for hosting me today, Jen. 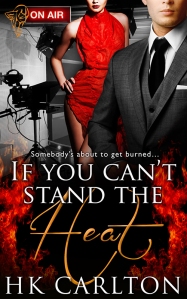 Somebody’s about to get burned…

An unlikely couple is brought together as celebrity judges on a new cooking show—Sesto Théodore, an American-Italian New York chef, and Syn Fully, a world-weary author of erotica. It’s instantly clear that they are complete opposites and their personalities clash, but physically, sparks fly and passion ignites.

However, after a video with some rather personal content surfaces on the Internet, Sesto immediately jumps to conclusions and accuses Syn of the breach.

Can the arrogant chef forgive and forget, or will his pride leave him out in the cold?

Reader Advisory: This book includes an occurrence of mild bondage and a scene of slightly dubious consent, as well as covert sexual contact in close proximity to bystanders. There is also reference to stalking and non-consensual taking of videos and photography and the dubious consensual use of restraints.

The director called for quiet as the broadcaster began to introduce the judges. The camera first on Maksim and his gap-toothed grin, then switched to Syn, who smiled seductively at her turn. But when the lens swung to Sesto’s cool greeting, Syn took that particular moment to run a long red fingernail from his knee, slowly, up his thigh, pausing at the crease of his leg. When she reached the desired destination, she took the heel of her hand on a deliberate torturous journey down the length of his rock hard utensil. His smile slipped into more of a grimace. Luckily they didn’t stay with him too long but swung back to the host Jeff, who was now explaining the rules and stages of the competition to the non-existent television audience.

One of the culinary assistants started walking across the stage with a large tray of colourful assorted vegetables while Syn moulded her fingers around the very shape of Sesto’s cock, stroking the outline through his trousers as if she were learning every inch of it. Sesto almost went cross-eyed in response. He gritted his teeth, but an uncontrollable gasp of pleasure mixed with surprise rushed from the back of his throat. Syn hummed low in response, leaning slightly closer, exerting more pressure. She then went after his zipper, raking her fingernail over the teeth. The scratching sound seemed overly loud in the quiet studio but the vibration it created against his distended flesh stirred him even more.

Sesto was certain Maksim had heard it and was well aware of Syn’s hand moving under the table. Syn toyed with the pull-tab on his fly, teasing with the notion that she might pull it down and insert her hand in his pants at any moment. His cock throbbed at the thought of her stroking him with the whole crew present. Tightening his thighs, he tried to calm himself.

At that instant, the kid holding the tray of food tripped over one of the many electrical cords taped to the floor, sending the enormous platter crashing to the floorboards. The frustrated director yelled ‘cut’ as Sesto took the opportunity to turn his wrath on Syn.

Standing, he demanded, “May I speak to you out in the hall, please!”

“Of course,” she responded, haughtily, as though she hadn’t just been giving him the initial stages of a hand job. He allowed her to take the lead although he was unexpectedly mesmerised by her long shapely legs, as she stalked across the space, confident and oh-so-fuckin’ sexy in those red stilettos. Sesto pulled level with her and couldn’t resist the urge to place his hand to the small of her back, left bare by the severe cut of her dress. If he wasn’t mistaken, she’d trembled at the contact. Or more likely his own hand had trembled.

In the hall, she turned to face him and at the same moment he blurted, “What the fuck do you think…” The words died on his tongue, as she once more found his firm cock with her hand, her gaze settled on his mouth, as she breathed shallowly.

“Where’s your dressing room?” she asked, backing him up.